One of the more constraining factors of geophysical survey in an archaeological context is the potential difficulty in dating or phasing anomalies in the data. Although hard science forms the main component of survey work, there is a large subjective element involved in the interpretation of geophysical survey data, which ultimately can decide the nature, function and phase of features. Our interpretation sometimes belies the complexity of the archaeological remains in question (issues relating to survey resolution and the nature of deposits can affect this) and this is particularly true of the different phases of construction and occupation at a site. Complementary information on the phases of deposits represented in geophysical survey data can be provided through surface collection and recording over the survey area, and this integrated approach to archaeological survey is particularly pertinent to the recent Portuslimen survey conducted at Ephesus.

In August and September of 2015 a small team of archaeologists from the University of Southampton travelled to Ephesus in Turkey, to take part in the season of fieldwork run by the Österreichisches Archäologisches Institut (ÖAI). The ÖAI has conducted archaeological research at Ephesus for 120 years (http://www.oeai.at/index.php/grabungsgeschichte.html ), and for the last 16 years has conducted geophysical survey across the site, with work directed by Dr Sirri Seren of the Central Institute for Meteorology and Geodynamics (https://www.zamg.ac.at/cms/en/news). The Portuslimen team were invited to look at some very specific areas of the ancient site and landscape, namely the areas of the inner and outer Roman harbours, and the surrounding landscape of the river. The aim of the survey was to add to the areas already surveyed by the ÖAI, and to address the development and possible phasing of the harbour complexes of ancient Ephesus. The team comprised the author, together with Dominic Barker, Ben Urmston, Jack Pink and Jack Frowde. 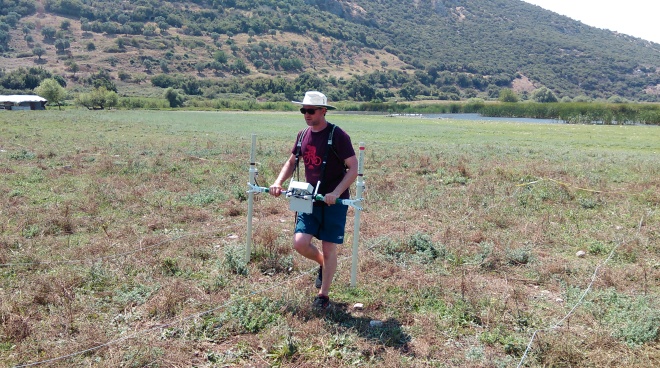 Magnetometry being undertaken at the inner harbour

To address these aims the team utilised fluxgate gradiometers, with gridding out and topographic survey conducted using an RTK GPS. Magnetometry was used in a field to the east of the inner harbour of Ephesus, and in fields around the outer harbour and river channel, also on the promontory overlooking the outer harbour.

In addition Electrical Resistivity Tomography (ERT) profiles were conducted at sites along the northern edge of the river channel, across the area of land between the outer harbour and river, and in the area of the floodplain to the north of the inner harbour. These were designed to assess the nature of the deeper sediments associated with the geoarchaeology of the landscape, for comparison with the borehole data collected by the University of Koln.

Although the geophysical survey techniques were deemed appropriate for the conditions of the site, the broad geographical range of the different survey areas,and the potential variations in phasing for the different results, presented the team with a problem; how to recognise the different periods of occupation in these areas, together with an idea of the character and function of many of the structures. To address these issues, fieldwalking was undertaken over each of the survey areas., utilising the grid set out for the geophysics, and using each of the survey markers as the central point for an area of surface material to be collected and recorded within a a 3m radius. 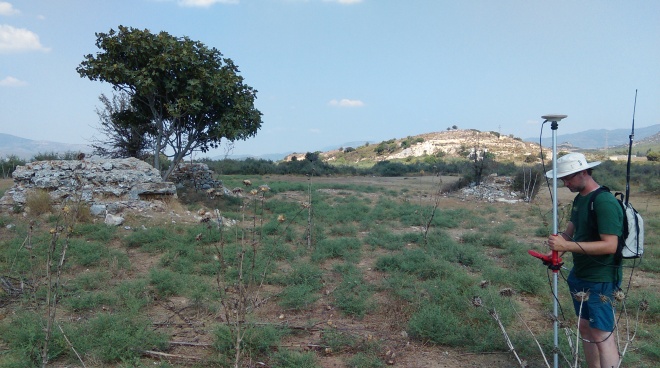 Set out of the survey grid using an RTK GPS

ERT survey to the north of the river channel 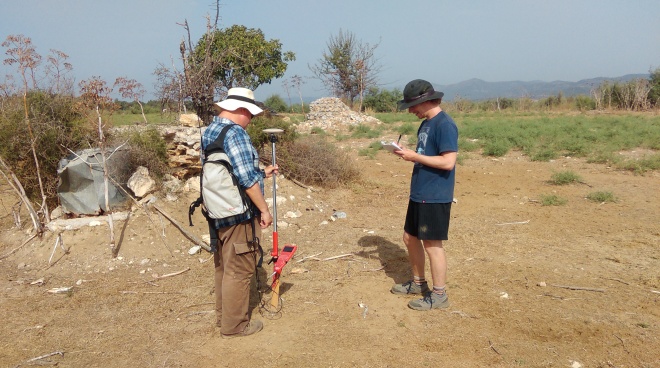 Surface collection to the north of the river channel, using the RTK GPS and note-taking

The method of sampling allowed collection of all pottery, with a record of presence and absence of CBM (? meaning )and building material. The collection of surface ceramics provides the diagnostic sherds necessary for establishing the type and chronology of the vessels, while its total collection over a small but standard sample area make it possible to calculate the count and weight of sherds and, thus, the potential ceramic density density in each area.

The results of the survey not only provided some excellent information about structures and port infrastructure in the different areas, but also provided some useful spot-dating of the potential phases of occupation of the areas. On the promontory overlooking the outer harbour a number of pit and gully features were found in the geophysical survey results, matching other surface evidence for Archaic settlement pre-dating the Roman harbour. The results of survey to the north and west of the outer harbour indicated large structures associated with the port, dating to the Roman and Late Antique periods. Finally the survey results to the north of the modern river channel detected structures and a possible canal that, when compared to the surface collection, seem to represent Late Roman and Byzantine phases of the port of Ephesus.

Location of surface collection points across the 2015 survey area 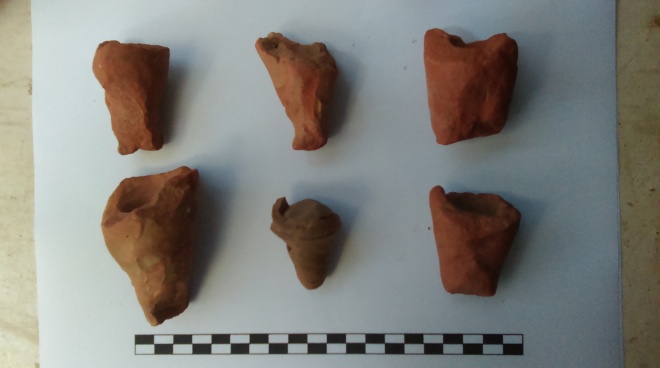 Roman amphora bases located to the west of the outer harbour

The results of the season are only preliminary, and further work needs to be undertaken on the data and at the site to fully understand the complexities of the changing harbours of Ephesus. However, a pattern is emerging which seems to indicate a gradual shift in the development of port infrastructure, with activity moving from the inner and outer harbours between the early Roman and Late Antique periods, to a later complex to the north of the modern river between the Late Antique and Byzantine periods. The evidence for pre-Roman occupation in the area is also of interest.

There are obvious caveats about the methodology that we have applied to the site, such as the depth of potential deposits and the nature of material exposed at the surface, which will ultimately affect the dating of material to particular periods of occupation. However, the combined strategy of surface collection and geophysical survey does provide us with a more nuanced data-set than with geophysics on their own, and has already started to raise interesting questions relating to the development and use of this fascinating port complex.